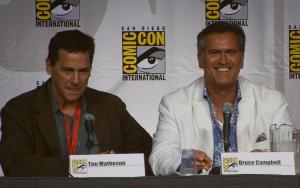 "My mother and grandmother were from the south, and they were yellow-dog Democrats. I was raised in the Civil Rights era. My mother worked for John Kennedy, campaigning. So, that's how I grew up. I wouldn't say I liked Reagan as a governor because it seemed like the homeless population increased overnight when he closed all of the mental health facilities in California. There were budget cutbacks. I'm not saying that good or bad, but suddenly, there were homeless people everywhere. It just seemed to be a direct correlation to him."

There's a stereotype that everyone in Hollywood is blind liberal, but that label does not apply to Tim. He was not a transplant that moved from somewhere else to California. He grew up in California and called himself a true citizen of the state. While some celebrities like to be parrots and voice things that they heard from another source to brighten up their images, Tim only speaks the truth when he talks about his state's political climate.

He never had luck with girls when he was young. He went to prom with his sister's girlfriend. After his acting career started, he fell in love with Jennifer Leak and married her in 1968. According to Tim, it was an immature decision. The relationship fell apart within six months after the wedding. They tried to keep the marriage alive, but they got separated a few years later, in 1971. He also had a romantic fling with Stacey Nelkin before his relationship with Leak.

In 1979, he met Megan Murphy, with whom he fell in love at first sight. Megan was not attracted to the partying Hollywood star, and thus she denied his advances. Tim left his partying style, and it took six years for Megan to accept him as her husband. The two finally got married in 1985. He has three children with Megan. He got divorced from Megan Murphy after 25 years of marriage in 2010.

The reason for his two divorces was never made public. He never spoke about his divorces but did talk about surviving it in general and having fun out of it. The kid's custody wasn't a part of the separation as they were all older than 18 at the time of the divorce. In an interview, Kristie Alley stated that she dated Tim in the early 1980s. Their relationship ended when Tim's fiancée visited him unexpectedly. Kristie escaped out of the window to avoid a scene. She tagged his fiancée as a secret fiancée, and there is speculation that the fiancée was Megan. He was dating Megan in the early '80s and was by 1986. Thus, there is a high possibility that the secret fiancée could be Megan. There are no details as to how Megan reacted to this. According to a few sources, Kristie's sex story can be the reason for Megan's separation from Tim. Some say that Tim and Kristie were having a casual sexual relationship and not a serious relationship. In March 2018, he married Elizabeth Marighetto, and the two now live in Hollywood, California.

FAQ: How old is Tim Matheson?