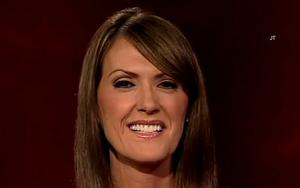 Dagen McDowell is known as an American news anchor and journalist. She is most famous for her appearances on Hannity and Mornings With Maria.

Mary Dagen McDowell was born into an Irish family on January 7, 1969, in Brookneal, Campbell County, Virginia. Growing up, Mary Dagen McDowell worked as a dressing room attendant and sold beer on a golf course, even waiting on famous people like Neil Diamond and his wife, Marcia. When she was a teen, she drove a four-wheeler to college and developed a love for racing. Since as a teenager, Mary knew what she wanted to do with her life. She was determined, she set goals, and she began the pursuit of those goals right away.

McDowell graduated from Wake Forest University with a bachelor's degree after majoring in Art History.

Dagen's first marriage didn't work out, but she has never given much detail on what caused the divorce. She is now happily married to her second husband, Jonas. Mary married Jonas Max Ferris, whom she met on the set of Cashin'In, in 2005. Jonas Max Ferris is an economist, an investment advisor, and an economic analyst for Fox Business News and is quite successful. Her husband, Jonas, offers financial advice and services to consumers via MAXFunds.com. His articles are also featured on FoxNews.com, Fox Business News (FBC), and New York Post websites. Since Jonas is also a television personality, they understand, support, and encourage each other.

Although the public frequently sees the couple, they do not like to share too much about their personal lives. However, it is known that they adopted a Chihuahua named Ramon. In addition, Mary does not take her health and beauty for granted, follows a strict diet, practices yoga, and regularly exercises.

Dagen McDowell started her career as a financial journalist by writing a newsletter. Mary worked at the Institutional Investor's Newsletter Division. After Mary developed confidence and gained experience in the financial news field, she worked at SmartMoney Magazine and SmartMoney.com. Later on, she was given a byline and started writing her financial column for TheStreet.com. Mary's column was called "Dear Dagen," as the column answered questions and issues put to her by the reading audience.

As she rose the ranks, Fox News Channel recognized her determination and talent. In 2003, Mary began to appear as a business contributor on Fox. Mary appeared on many business-related shows and was also a member of a guest panel. Mary rewarded Fox for taking a risk by becoming a regular guest on "Your World with Neil Cavuto" and "Cashin'In." Mary's natural rise to fame began after she became an anchor for Fox Business Network in 2007.

Mary was also a business contributor for the Imus in the Morning radio show and a regular guest on the Fox Financial News show, Hannity.

Mary is loved for the opinions that she shares with her audience on social networks. People from various social media often follow her advice, especially her fans on Twitter, with over one hundred thousand followers. In one of her articles in the Dagen's newsletter column, she discussed municipal bonds and what could be done after Washington's new tax cut on income. She said that after this cut, states have been busy doing the reverse, hiking taxes, so if someone wants an investment that sidesteps federal, state, and maybe even some local taxes, they should consider municipal bonds.

Tax-exempt bonds are typically cheap, and at the same time, the supply of municipal bonds has picked up as state and local governments try to take advantage of the low rates. One two-year municipal bond delivers 89% of the yield of a two-year Treasury, so it is far better off to be in that municipal bond after considering taxes. But there is a difference in credit quality as there is no better credit than the U.S. government. The U.S. can print money while the state of Maryland and the state of New York cannot. Another difference is related to liquidity as it is easier to sell U.S. Treasuries. If you need to sell municipal bonds before maturity, a significant penalty is extracted if you're a small investor. To get an efficient price in the municipal bond market, you have to be sold in increments of a half-million dollars and higher, and this is the type of advice that Mary offers her fans so well received that.

Currently, Mary is an anchor on the Fox Business Network and appears daily on Mornings with Maria. In 2016, she also took over as the host of "Bulls and Bears" due to the previous host's (Brenda Buttner) terminal cancer diagnosis. It has been estimated that the current total of Dagen's accumulated wealth is close to five million dollars and that she gets a $350,000 annual salary.

FAQ: How old is Dagen Mcdowell?

FAQ: What is Dagen Mcdowell networth in 2020?