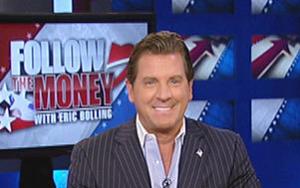 Eric Boiling was born on the 2nd of March 1963. He was born in Chicago, United State. In his college days, he was considered as promising baseball player for the future and this got him selected for a league as a rookie. This dream of becoming a star in the baseball player was cut short as he got injured and that dream was shattered. He got married to Adrienne in 1997.

Ever since he got married, there hasn’t been news of extra marital activities. Peradventure, he knows how to keep his balls in his pants. Eric Bolling and his wife have been together for more than 15 years and neither have we seen his face been scratched by his wife. Well we will believe that things are going wonderfully well with them. They do have a son, whose name is Eric Chase.

He attended the Queen of All Saints for his grade school and did his high school at Loyola Academy. In Winter Park, Florida he graduated from the Rollins College in 1984 where he got a Bachelor’s degree in economics. In 1984 Major League Baseball Draft, he was drafted in the 22nd round by the Pittsburgh Pirates. Due to a torn rotator cuff injury, brought his career to a halt.

He is a news broadcaster and traditional TV host and is with Fox News. He is a well know commentator and financial analyst. He also co-anchored the Fox News program the Five. Awarded for his frankness on his political opinion on news channels and also for Fox News. Bolling concentrates mainly on financial issues on the show he anchors for the channel. Apart from this, he is an investor coupled with his being a columnist. He graduated from Rollins College, Florida.

Bolling started his career as a trader. His business was exchanging at New York. At there, he traded on natural gas, gold, oil and other commodities. After five years at the mercantile exchange, he became the strategic advisor to the Board of Directors of this exchange. For two consecutive years at the office. The Journal traders gave him an award in 2007 for his achievement. Bolling joined the Fox Business Network as a financial analyst and was hot of Happy Hour.

In June 2011, he mocked Barack Obama on his decision on inviting the Ali Bongo Ondimba, the Gabon’s President in the White House. According to Bolling, a dictator was coming to dinner. It’s like he loves criticizing as he again criticized Barack Obama for letting a Common, a rapper to show up in the White House for weeks. Well some groups weren’t happy with this criticism that he is a racist. Well you can be assured that celebrity always replied when you criticize them. He took to his twitter account and said the people accusing him were baseless because he is working for Fox News. Well he made a public apology for his outrageous statement about Obama meeting with the President of Gabon.

Bolling hosted the Five on the Fox Network, this show as discussion on a roundtable of the top cultural and political stories that occurred during the day. He and Bob Beckel, a political pundit co-host were popular for their powerful opposition on issues. Both of them have developed friendship and mutual respect for each other as a result of this. Bolling perhaps rescued the life of Beckel in 2011 at a local restaurant where he performed the Heimlich maneuver.

FAQ: How old is Eric Boiling?