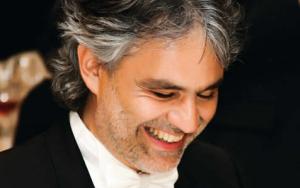 People Magazine voted Bocelli one of their 50 Most Beautiful People in 1998. He also earned a spot in the Guinness Book of World Records for Sacred Arias, his classical album that simultaneously held the top three sites on the US Classical Albums charts. In 1999, he was nominated for Best New Artist at the Grammy Awards, and his duet with Celine Dion titled "The Prayer" won a Golden Globe Award for Best Original Song. Bocelli was honored with a Hollywood Walk of Fame star on March 2, 2010, for his Live Theatre contributions.

His famous icons well regard him. In 2009, Elizabeth Taylor said, "My mind, my soul was transported by his beauty, his voice, his inner being" after seeing his Hollywood Bowl performance. Celine Dion has stated, "if God would have a singing voice, he must sound a lot like Andrea Bocelli." Jazz singer Al Jarrea and producer David Foster have declared Bocelli's voice to be "the most beautiful voice in the world." Oprah Winfrey announced on her talk show, "when I hear Andrea sing, I burst into tears."

Bocelli established the Andrea Bocelli Foundation in 2011 to "empower people and communities in situations of poverty." "I strongly believe that love does justice," he says. "And it is for this simple reason that we are all responsible for building a better world."

In addition to his foundation, he has also participated in numerous charity benefit concerts such as the Michael Jackson benefit in 1998, the Memorial Concert at Ground Zero in honor of the September 11 victims, and the Music of Asia festival in 2004 for the Indian tsunami appeal. He performed at the 52nd Grammy Awards alongside Mary J. Blige and David Foster to raise awareness for the victims of the 2010 Haiti earthquake. He also performed at the Children in Need Rocks Manchester concert in November 2011.

Bocelli worked alongside his hometown of Lajatico in 2006 to build an outdoor theatre named "Teatro del Silenzio" (The Theater of Silence.) Every July, for one night only, Bocelli performs a concert there. Every other night of the year, it remains silent.

Bocelli is a dedicated Catholic and is passionately pro-life. Doctors had advised his mother to abort Bocelli in the womb due to his disabled eyesight. Thankfully, she did not, and her decision formed the foundation of his beliefs. Nevertheless, he chooses not to talk about his blindness when it can be avoided, asking interviewers to "go to the next question." In regards to Religion, he states, "Religion has the first place in my life. I do not think anyone can ever do anything without the help and will of God." "It is not Christian to go against someone. I am in favor of life. And, of course, I do not share the idea of being able to interrupt life arbitrarily."

Bocelli's fifteenth studio album, Cinema, was released on October 23, 2015. It includes renditions of classic film soundtracks and scores and duets with Ariana Grande, Nicole Scherzinger, and his wife, Veronica Berti. It is available on iTunes. The album was nominated for a Grammy Award for Best Traditional Pop Vocal Album at the 59th Annual Grammy Awards. The Spanish-language version was nominated for Album of the Year at the 17th Annual Latin Grammy Awards held in Los Angeles.

Bocelli's first single in fourteen years, "If Only," was released in June 2018 and became a hit worldwide.

Bocelli released the single "Fall On Me" on September 20, 2018, which features vocals from his son Matteo. The two danced to the song on the episode of Dancing With the Stars that aired on October 22. It was released in October as an English-language version, and it was used as the end credit song for the Walt Disney Pictures film The Nutcracker and the Four Realms. Both songs can be found on Bocelli's latest studio album, S, released on October 26, 2018.

In honor of his close friend Sarah, the Duchess of York, Bocelli performed two songs at the royal wedding of her daughter Princess Eugenie on October 12, 2018, at her request. The Ave Maria by Bach and Gounod, and Panis angelicus by César Franck were performed.

Bocelli performed a sold-out concert at the 'Winter at Tantora' festival, held for the first time in Saudi Arabia on February 1, 2019, at Al-'Ula.

Bocelli performed an Easter Sunday concert from an empty Milan Cathedral on April 12, 2020, during the national COVID-19 lockdowns in Italy. Cathedral organist Emanuele Vianelli accompanied him.

A live stream of the performance, titled "Music For Hope - Live From Duomo di Milano," was broadcasted on YouTube, where it can still be viewed in its entirety. Approximately 5 million people tuned in to watch the Livestream performance, and by April 13, 2020, the archived video had received more than 32 million views.

Believe, a new album by Bocelli was released in November 2020. It was held in response to the Covid pandemic and featured recent songs related to the pandemic.

In 2021, he performed the Puccini opera "Nessun Dorma" at the Opening Ceremony of the UEFA European Football Championship, held in Rome, Italy, on June 11, 2021.

FAQ: What is Andrea Bocelli networth in 2020?