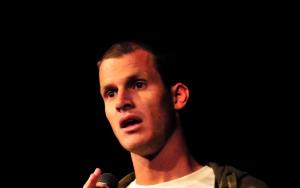 Daniel Tosh has shared the stage with some of the top names in comedy, and his first significant appearance took place on the David Letterman Show in 2001. Later, he appeared on the late-night talk shows of both Jimmy Kimmel and Jay Leno. As Tosh's fame grew, he spent three seasons as one of the Comedy Central TV show 'Brickleberry' producers. The show had previously been turned down by other broadcasting companies who deemed it too offensive.

The bold comedian, renowned for his deliberately offensive and controversial style of black comedy, advocates that no subject is too taboo to joke about, including racism, suicide, sex, politics, religion, and even rape. This last topic sparked enormous controversy in 2012 when he reportedly retaliated to a female audience member's remark of "rape jokes are never funny" by saying to his audience, "Wouldn't it be funny if that girl got raped by like, five guys, right now… like right now?" Though Tosh disputed the wording of the quote and later apologized for the joke, an avalanche of social media backlash ensued about whether the comedian had finally crossed the line.

Louis C.K, the star of Louie on the FX channel, said, "this is a fight between comedians and feminists, which are natural enemies. Because stereotypically speaking, feminists can't take a joke" and "comedians can't take criticism." This sparked even more controversy and prompted Katie Harper, a comedian, and blogger, to write, "The debate could have been between feminists and comedians if the subject of the debate were an actual joke. As a feminist who does satire and has a rape joke in my routine, I'm all for subversive and challenging humor, but not unfunny, clichéd, obvious, sexist statements dressed up as jokes. Saying feminists aren't funny is like saying men aren't funny. There are funny and unfunny feminists, and there are funny and unfunny men; it's much more convenient to dismiss all feminists as humorless because it protects comedians, and sexist non-comedians, from valid criticism."

Despite the controversy, this type of envelope-pushing dialogue undoubtedly has made Tosh.0 one of the most popular comedy series on television. Tosh maintains an insensitive stage persona, but a few public glimpses reveal his softer, personal side. Tosh.0 was used as a platform for the comedian to talk about his friend Andy Ritchie, who had been diagnosed with a brain tumor. Tosh encouraged his viewers to donate money to his friend's fundraiser with an uncharacteristically severe tone, resulting in over $50,000 in donations to Ritchie's campaign. Another of these heart-melting moments was when Tosh tweeted, 'being married to a ballerina has made every day a little more beautiful.'

FAQ: How old is Daniel Tosh?