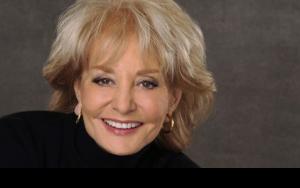 Barbara Walters was born on September 25, 1929. She was born to parents, Dena Seletsky Walters and Lou Walters. Her father, Lou, was a nightclub impresario. She had a brother and a sister. Her brother, Burton Walters, died tragically of pneumonia complications in 1932. It left a lasting impression on Walters, who then gave extra special care to her sister. Her sister, Jacqueline, was unfortunately born developmentally disabled.

Walters attended both Fieldston private school and Birch Wathen private school in New York City. She spent her early years in Boston. As her father, Lou Walters, opened a number of chain nightclubs in Boston, Massachuesetts, to Miami Beach, Florida, she moved a lot as a child. She graduated from Miami Beach High School in 1947. From a very early age, Barbara was always surrounded by celebrities. It has been said that this is the reason for her relaxed and confident demeanor when interviewing celebrities, infamous people and world leaders.
For college, Walters went to Sarah Lawrence College in Bronxville, New York. She graduated in the year of 1953 with a bachelor's degree in English.

After graduating, she worked for a short time as a secretary. Very soon after that, she landed her first real job in journalism as the assistant to the publicity director of WRCA-TV, Tex McCary, who was a Republican activist. At that NBC affiliate, she honed her producing and writing skills to a great extent. Walters then moved on to CBS, where she had a job writing material for the network's Morning Show. In the year 1955, Walters was wed to Robert Henry Katz, a busniness executive. Their marriage lasted until 1958, when they got a divorce.

In 1963, Walters married her second husband, Lee Guber. Guber was a theatrical producer. Together, they adopted a daughter whom they named Jacqueline Dena after Walter's sister and mother.

After being hired in 1961 by NBC and working as a researcher and writer for it's popular Today Show, Walters was given a breakthrough assignment to travel with First Lady Jacqueline Kennedy on a trip to Pakistan and India. Her report was well liked and this resulted in her increased responsibility at NBC.

By 1964, Walters was well known as a staple of the Today Show and earned the nickname of "Today girl." She starred side by side with Hugh Downs and later, Frank McGee. Even though she worked as a co-host, she was not officially given that title until many years later in 1974. She was restricted from asking the show's more serious guests any questions until after her male co-host had finished asking his questions.

Walters had worked for the Today show for eleven years. During that time, she became proficient with her trademark "probing-yet-casual" interviewing technique. She was well known around the country for being a competent journalist by 1972. For Richard Nixon's historic trip to China, Walter's was chosen to accompany him as a part of his press corps. She won the best host in a talk series Daytime Entertainment Emmy Award in 1975.

Also in 1975, Walters became the first woman co-anchor of a network evening news program. She accepted the job from ABC network because they had offered her a $1 million annual salary, unprecedented at the time. Also in 1976, Walters was selected to moderate the third and final presidential debate between incumbent President, Gerald Ford, and challenger, Jimmy Carter. Walters also launched the first of a series of her specials in 1976, known now famously as Barbara Walters Specials. The first one featured an interview with President Jimmy Carter and First Lady Rosalynn Carter. The following year in 1977, Walters arranged the first joint interview with Prime Minister Menachem Begin of Israel and Egyptian President Anwar Sadat.

FAQ: How old is Barbara Walters?

Quick Facts
Help us Edit this article and get a chance to win a $50 Amazon Gift card.
Last Modified: May 6 2020
You may also like
articles you may like