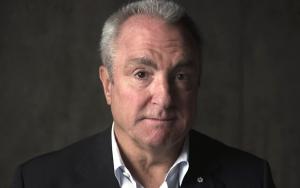 "I've been there forallthe golden years, and I can tell you, they weren't golden at the time." - Lorne Michael

Now moving on to his physical configuration, Lorne possesses an average tall height of 5 feet and 7 inches. Moreover, he is 71 as of 2016 and we must admit that he looks fit and healthy. As per as our analysis, he was a slim/ thin man when he was young. Young Lorie even possessed a medium length messy hairstyle. However, he currently possesses a short hairstyle (white).

Talking about his relationship status, he is a committed man. His wife is no other than his former assistant Alice Barry. From what we have heard, Alice and Lorne are marred since 1999. Beside hi marriage to Alice, he has been married two times. His ex wives are SNL writer Rosie Shuster (m - 1967, d - 1980) and model Susan Forristal (m - 1984, d - 1987). Moreover, many websites have reported that he has three children altogether.

Fans cannot connect him on his social networking sites as he is not active in any online social platforms. However you can always visit his official website www.broadwayvideo.com/who-weare/ if you want to know more about his professional life.

Ironically, he is one of the longest serving and experienced producers in the country (Radio Broadcaster/writer turned actor turned producer). Of course, that required a lots of tough and smart decisions, which may have brought his door a remarkable amount of controversies and people's bashing.  There is no need to portray him as an evil genius because he is not. But we can surely call him a hard worker who aspired to introduce talents to the world keeping both technical and business aspect of the show as strong as he could.

It's great to see the way everyone respects him. Anyway, you should check out his Jimmy Fallon's impersonation of his then boss Lorne. In one interview, Jimmy said Lorne's SNL days suggestions were really inspiring and moving despite the fact that it would take him a good number of days to figure out what Lorne actually said. Yes, Michael communication skills may not be of a sales pitcher, but he sure knows to manage his works like a boss with required control and vision.

FAQ: How old is Lorne Michaels?