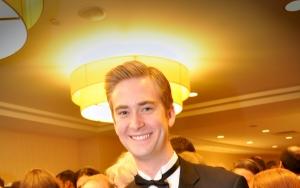 Peter Doocy is an American journalist who works for Fox News as a White House correspondent. Steve Doocy, the co-host of Fox & Friends, is his father.

Peter Doocy was born on July 21, 1987. He is the son of Steve Doocy, a news anchor at Fox News. His mother is Kate Gerrity, a former model and child actress who showed about ESPN style. Doocy attended Villanova University and worked as a contributor to "The Palestra," a partner site of Fox News during his time in college. He graduated from Villanova University with a Bachelor's Degree.

Doocy was thrust into the limelight when he asked John McCain a controversial question about Hillary Clinton and her drinking habits during the Hardball tour with Chris Matthews. The exact question that Doocy, still a Villanova student at the time, asked McCain was whether he thought Hillary Clinton "finally resorted to hitting the sauce because of unfavorable polling." That and one other question prompted his fellow host Matthews to joke, "We came here hoping for the best, and we got two of the most wise-ass questions." Shortly after that, his father congratulated him for his hard-hitting questions on "Fox & Friends." Unfortunately, the questions also prompted Keith Olbermann to name him one of the "Worst People in the World." Steve Doocy then attacked Olbermann, calling him "a guy who picks on people's children." Nevertheless, the interview would help launch Doocy into a successful and fruitful career.

Peter Doocy is known to keep his personal life private. At their family home in New Jersey, Doocy lives with his father, renown Fox News anchor Steve Doocy, his mother Kate Gerrity, and his two siblings, Sally and Mary.

Doocy is a single unmarried man and seems to be enjoying his bachelor life. Being in the limelight and still not having any rumors of female companionship has raised questions concerning his sexuality. However, the young, charming, and energetic reporter is famous among the ladies. Many websites consider Peter Doocy to be the hottest young reporter on the Fox News Channel. Many fans visit his profiles on social networking sites such as Facebook and Twitter daily, and he has over 141,000 followers on Twitter.

An interview he gave to "The Hill" media network clarified a few things about him and his preferences. He revealed that his favorite movie is "Forrest Gump." His favorite pick-up line is "Did it hurt … when you fell from heaven?" Doocy also revealed that his celebrity crush is Kate Upton. When asked what his most embarrassing or memorable moment was when he replied, "Embarrassing? Fell into a hole on live TV during Superstorm Sandy coverage. Memorable? Like five minutes later, when the picture of me falling into the hole was on every website heard from a lot of old friends."

In 2009, Doocy joined his father at the Fox News network. As a reporter, Doocy covered various stories, including Hurricane Sandy, the presidential elections of 2012 and 2008, and the 2011 floods of the Midwest. Doocy gave live reports on Hurricane Sandy from Rehoboth Beach. Doocy also covered the story of the heart transplant surgery of former Vice President Dick Cheney. In addition, Doocy's reporting on the school shooting at Sandy Hook Elementary School in Connecticut earned him praise from the public.

Among other significant events that Doocy covered was the Boston Marathon bombing. In addition, Doocy's live report of Washington's lethal Navy Yard shootout is considered to be his career's best reporting. Doocy is known as one of the youngest reporters of Fox News Channel. In November of 2014, he hosted a documentary titled "The Man Who Killed Usama bin Laden." The documentary featured the first televised exclusive interview with Robert O'Neill, the Navy SEAL who says he fired the shots that killed terrorist leader Osama bin Laden. The documentary became the highest-rated documentary in Fox News Channel's history. One of the most memorable moments in his career was when he was caught in a sand trap during his reporting on Hurricane Sandy. During filming, Doocy said, "It looks like the sandy walkway out to the beach has got my foot stuck!" Fox News anchor MacCallum said, "Oh, Peter, take it easy out there." Doocy concluded, "Not a pretty picture here in Delaware, but I'm OK."

FAQ: How old is Peter Doocy?

Quick Facts
Help us Edit this article and get a chance to win a $50 Amazon Gift card.
Last Modified: Aug 10 2021
You may also like
articles you may like